Carbon monoxide detectors are an essential part of keeping your family safe. We highlight the best practices of where you should place the detectors.

Where to Install a Carbon Monoxide Detector 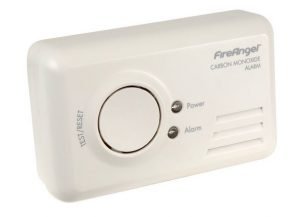 As important as smoke alarms, they are designed to go off and produce a high frequency, beeping sound when carbon monoxide (CO) levels are considered too high.

What is the ideal mounting height? In our opinion, the number one place to fit a carbon monoxide detector is close to where you have gas appliances. Ideally, next to a boiler and gas hob and so on. However, you should read the manufacturers installation instructions and follow their guidelines.

The CO gas does not necessarily rise but will mix with the air that it meets, so place the alarm somewhere along the middle of the wall.

It’s not advisable to put it on the ceiling as the gas will diffuse through the air and spread out. While hot air and smoke will rise, CO gas does not.

Do I have a legal obligation to fit CO alarms?

Not in all cases. It is a legal obligation to fit one if the home has a solid fuel burning appliance e.g. a log burner.

If I’ve had a new boiler installed, should I fit a CO alarm?

If it’s a new combi-boiler – which are all sealed units – then risks with carbon monoxide poisoning should be non-existent. The situation where a new combi-boiler could cause CO issues is if the engineer attending to the fitting or repair of the boiler did not replace the seals properly.

How many carbon monoxide alarms should I fit in my house?

CO is a by-product of fuels being burned, such as charcoal, natural gas, kerosene, wood and so on.

If you burn these fuels in your home, then you need to ensure your appliances are sealed units. However, sometimes leaks do occur so it’s important to have the right detectors, fitted in appropriate right areas.

While it is highly recommended to have an alarm in every room, this isn’t always economically viable or logistically possible.

With the above in mind, it is recommended you follow the guidelines on locations below:

Maintaining a CO alarm in your home

What are the dangers of carbon monoxide poisoning?

The silent killer. It’s poisonous, odourless and colourless. Once inhaled, it stops your body from getting the oxygen it needs.

When it is inhaled, the CO (carbon monoxide) attaches itself to the molecule that is tasked with transporting oxygen around the body. These molecules, called haemoglobin, will then become saturated with CO instead of O2 (Oxygen) as more and more carbon monoxide is taken in. Carbon monoxide poisoning then ensues.

What are the symptoms of Carbon Monoxide poisoning?

Early signs may include queasiness, confusion, dizziness, nausea and vomiting. Young children and the elderly are more sensitive to CO poisoning.

If the concentration of the gas inhalation is high, then a person may lose consciousness. Carbon monoxide inhalation is the highest cause of death due to poisoning in the USA, Britain and France.

I’ve heard that in the future, installing a CO alarm will be mandatory

At time of writing, it is only a legal requirement to install a CO alarm in a room containing a solid fuel appliance. The government have been consulting on extending this requirement to all rented properties.

A campaign group calling itself Project Shout is involved in lobbying the government to make the installation of a CO alarm mandatory in all properties.

A consultation took place last year, running from November 2017 to January 2018 and the relevant Government departments are analysing the feedback. As time of writing, no decisions have yet been made, which means mandatory regulations have not been drafted.

What is the recommendation by the Health and Safety Executive?

The Health and Safety Executive (HSE) provides guidance for regular inspection and servicing. In their guidance, this is the best way to ensure safety.

The most common cause of carbon monoxide poisoning and related incidents is due to a lack of inspection and servicing, coupled with old appliances that predominantly have an open flue.

Furthermore, the HSE state that 1 in 20 incidents investigated indicate the source of the CO to be from a neighbouring property.

Why are older gas appliances problematic?

Older appliances such as boilers tend have an open flue. This is upto 10 times more likely to be the source of a poisoning incident than modern room sealed appliances. Defunct back boilers and warm air units are hazardous and need to be decommissioned at the earliest opportunity in our opinion.

Is everyone aware of the risks posed by carbon monoxide?

As an owner occupier of a property, we need to check the gas appliances. Many do get their boilers checked and serviced but older appliances can sometimes get overlooked e.g. open flue gas fires which are decades old.

A project funded by HSE states:

The HSE report linked above, concludes that:

2% of all homes were assessed to have a “very high” risk, and a further 4% were estimated as having a “high” risk of exposure to concentrations of CO above WHO guideline levels.

Particularly vulnerable are the elderly and those on the lowest incomes that may be more concerned about heating bills over winter. A report by National Energy Action (NEA) found that households suffering in cold homes are also at risk from carbon monoxide poisoning.

What are the Symptoms of CO Poisoning?

Vomiting and serious confusion are the tell tale signs that things are very serious. From here, loss of consciousness can occur.

Ultimately, heart and brain failure can lead to death.

To read more articles like this one, please visit our Home Alarms page.