Introductory Note: Do not use a fire extinguisher on a burning fire unless you feel you are able and that it’s safe for you to take on the task. If in doubt, call your local fire service.

What Types of Fires Are There?

It’s important to use the right fire extinguisher for a specific type of fire.

Before you by a fire extinguisher, it’s best to clarify in your own mind as to what type of fire you’re likely to be concerned about in your property. These are classed in 5 groups, Class A, B,C,D and F (or K in the USA):

The above has been sourced from this list of Fire Classes. 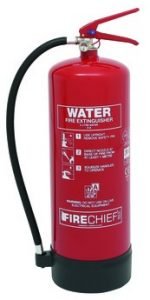 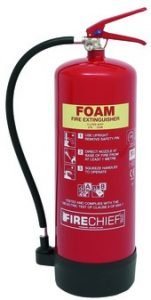 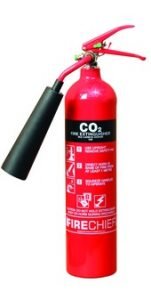 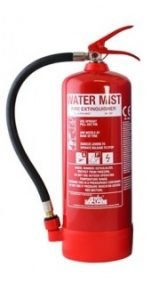 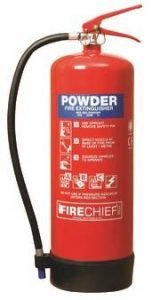 What Type of Extinguishers Are There?

Following on from the above, there are five main types that can be used at home, in your car or caravan:

When tackling a fire in the home where the fuel is paper or wood, using a water extinguisher is good as it drenches the material and eliminates the fuel at the same time.

You should avoid using these types where an electrical fire has started as water doesn’t mix well with electricity and you may be prone to getting electrocuted.

Most water types have an additive mixed into them which makes it quite safe to use on electrical fires, but it’s best not to take the risk in most instances where an electrical fire has broken out unless absolutely necessary.

Can be used on flammable liquids, chip pan fires, oils and petrol. This extinguisher sprays out an expanding layer of foam, cooling down the burning material and acting as a carpet to stop oxygen fuelling the fire. Like the above, most can be used on electrical fires, but it’s best checking first.

This is one of the best fire extinguisher for electrical fires as it leaves no residue i.e. the electrical items can probably be used again afterwards. The extinguisher contains pressurised CO2 gas, so when spraying the strong jet of CO2 on a fire, you are depriving the burning fuel of any oxygen. It’s important to remember that once you’ve eliminated any fire, check that there are no burning embers as once the CO2 has dissipated and O2 comes back, it could provide enough oxygen for the fire to start up again.

Due to the jet pressure, it’s best not to use this on liquids which could be forced around the room e.g. in a deep fat fryer.

These are specifically designed for use on chip pan fires and burning oil. The specially adapted hose comes with a lance which sprays out a layer of foam o the burning material.

This type of extinguisher is good for deep fat fryers, chip pan fryers and hot liquid fires as you are not blasting a jet of water or gas at the source of the fire which could make things worse.

Some of the brands, such as UltraFire contain de-ionised water, meaning the conductivity has been eliminated. This means you can also use this type of extinguisher on electrical fires.

While these are suitable for fighting class A, B or C fires, British Standard does not allow for this type of extinguisher to be used at home, in the office or in cars/caravans. We will explain this later on.

It should be noted that the powder will have no effect on cooling the temperature of the fire, so if you don’t get to the source of the fire, there is a chance that it could reignite.

The reason British Standard has disallowed this type to be used at home and the office is that in small and enclosed spaces, the powder can be accidentally inhaled by the user.

General Notes on Fighting a Fire

Due to the versatility of Dry Water Mist types, we’d usually opt for this type on a more regular basis.

If for some reason you are unable to buy or store extinguishers in your home, then at the very least, please buy a fire blanket. This is the most basic of items and we believe it should be mandatory in all homes.

To read more articles like this, visit our Home Safety page.