Introductory Note: This post was last updated in July 2021. Please check current legislation as the information on this page may not be the latest.

The better question is: are they a fire risk? and the answer is 100% yes.

Why people would still consider installing this type of material above head height onto ceilings and walls is beyond me. Yes, they're easy to handle, easy to cut and easy to fix onto plastered surfaces, but the benefits are far outweighed by the risk of injury should a fire occur. 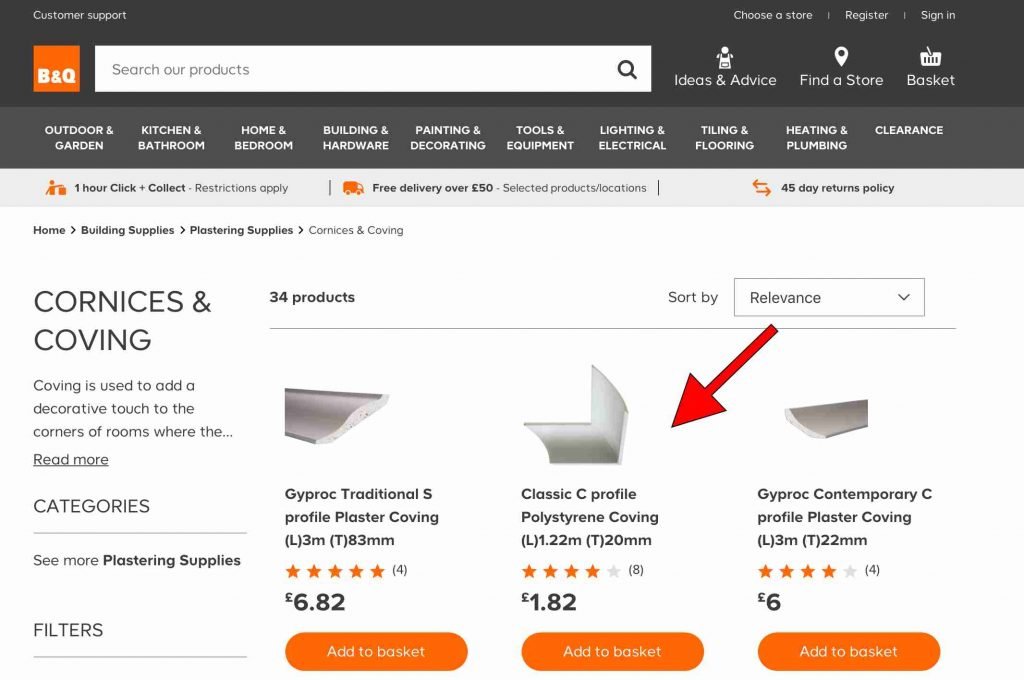 On our homepage, we link to articles and guides on safety and this post is a continuation of that. We've recently been undertaking a number of refurbishments on old terraced properties and it is startling to see how many homes still have ceiling tiles - polystyrene or otherwise.

I can accept that at at some point an ugly ceiling may have been easily covered by a thick wallpaper or tiles, but I can't ever see how polystyrene as a material would ever have looked any better. The glossy and artificial look of the material is off-putting to most people.

Polystyrene Coving is flammable: why does it exist?

The past 12 months, we've done about 12 refurbishments. We do tend to buy old, dilapdated houses that need at least a cosmetic turnaround. Of the 12, about 4 or 5 had occupants that had been in the property for over 20 years. This might go some way to explain why these ceiling tiles and coving had remained i.e. no refurbishment had taken place.

For example, in the house below, the decor and furnishings give away that the property is dated and hasn't had an overhaul or even a facelift in the last decade. 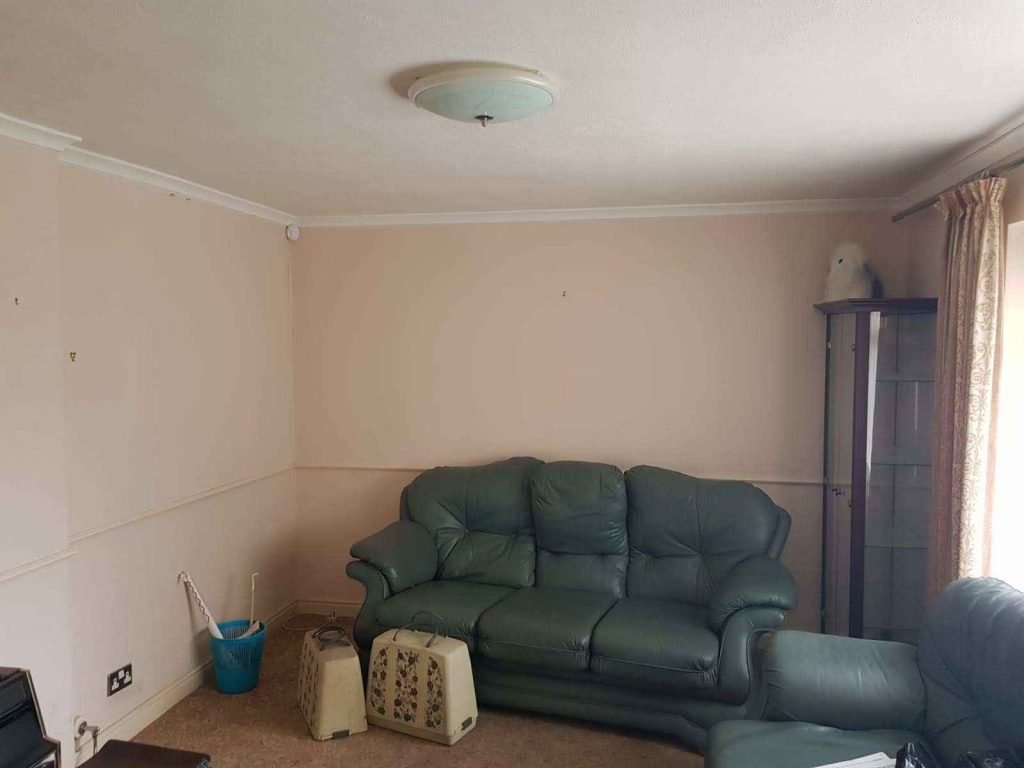 You can see from the green sofa, the vanity cabinet and curtains that the property is dated and the owner hasn't seen any need to get rid of the polystyrene coving all around the room.

However, it takes less than £100 to buy enough alternative coving material to fix the problem.

If you've taken the right steps and discussed an escape route with your family and bought a carbon monoxide detector and some smoke alarms, then why avoid this step?

While it might not seem to be a problem right now, all it takes is an out of control house fire for the plastic to start dripping and burn your skin as it falls from above. When trying to deal with a fire and smoke, this is the last thing you need.

In the late 1960s, they starting appearing in most rooms of a house including the living spaces and kitchens. At the time, they probably had a sleek, smooth look to them and they did a good job of covering up unruly looking ceilings that had poor paint finish or slight scuffs and cracks.

It's surprising that they still appear on some ceilings, but it is mostly in houses where the occupier has been living there for a long time and hasn't changed decor for decades.

The material itself, in simple terms, is based on refined crude oil, used in the manufacturing of plastics. This means, it is a flammable material (as are almost all products that are derived from crude oil).

Polystyrene that is used for coving and ceiling tiles has been expanded using a gas, giving it a light and airy feel. It has traditionally been used to act as an insulator between brick cavities and behind plaster. With this type of usage, we needn't be too concerned as there is a non-flammable material covering it. The problem arises when this type of material is used directly on the exposed surface, when it becomes visible to the naked eye. 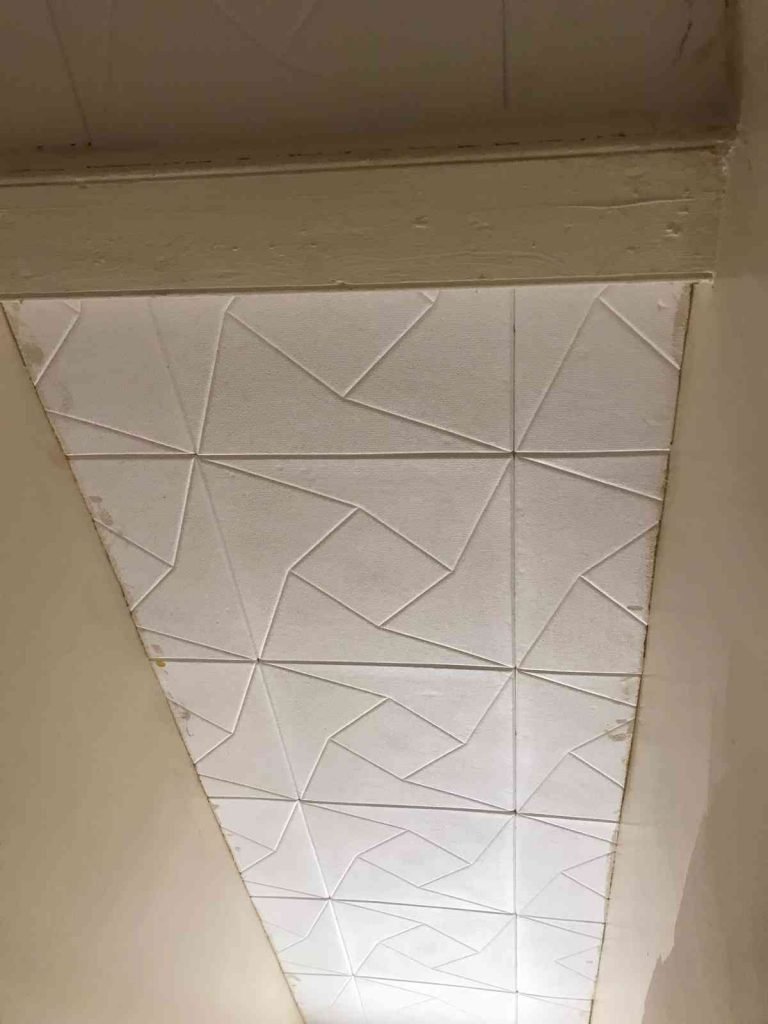 In the event of a fire, these types of materials on the walls and ceilings will begin to breakdown when approaching temperatures of 100C. At this temperature, they emit poisonous and toxic gaseous emissions which could itself ignite. Add this to the slow melting of the plastic, dripping onto anything beneath it i.e. the furnishings, carpet and any passers-by (eeek!) and you have a very dangerous addition to an already alarming situation.

The fire doesn't even need to be in the same room as the gaseous emissions can travel through openings and affect people in other rooms which might appear to be relatively safer.

We are quite shocked that these types of materials are still freely available through DIY stores and to the general public, especially in light of the Grenfell Tower disaster in London from 2017 which claimed over 70 lives. 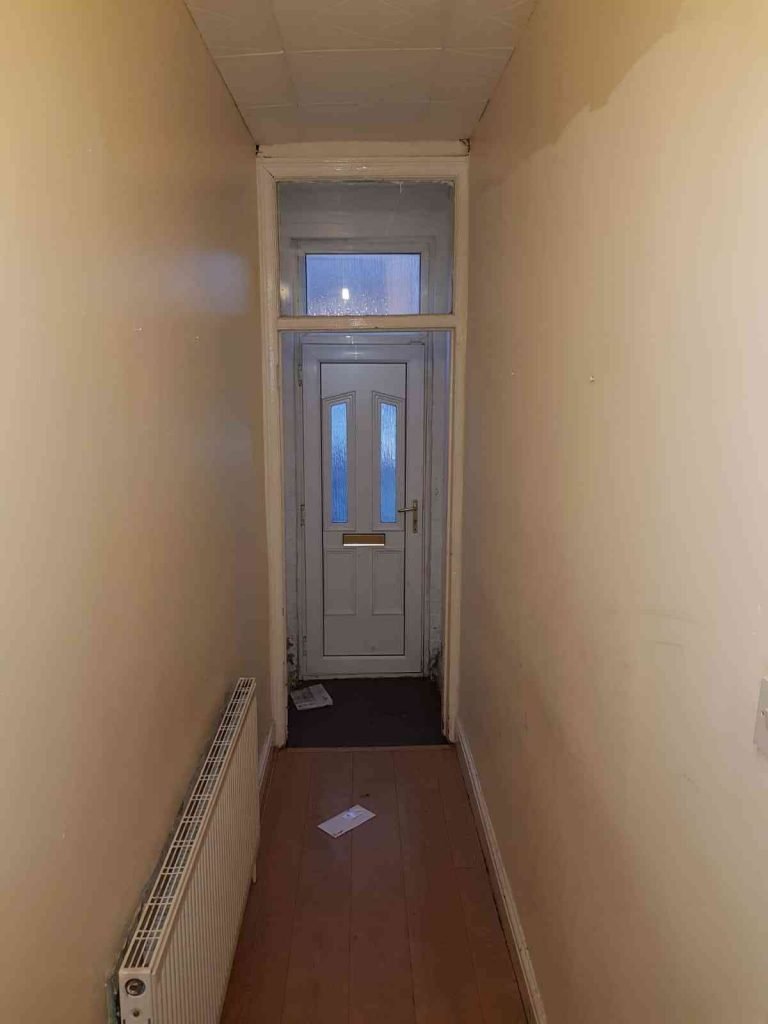 Can it be Found Elsewhere in the Home?

Yes, it can. We've had instances where we've exposed fitted wardrobes and polystyrene tiles have been found there. It was probably installed there to maintain insulation from a cold adjoining wall.

We've also encountered them in fitted cupboards, and in one case in the cupboard which housed the consumer unit! The mind boggles. Again, it was probably the case where the connecting wall was to an outside wall and the previous owner probably had concerns about insulation.

Lastly, we've actually seen it fairly recently where a homeowner has a colder loft or attic and has installed 'polystyrene wallpaper' behind the actual wallpaper. Sold in thin rolls, the insulating wallpaper is affixed to the wall using a special type of glue. Once it's dried and firm, you put on your normal wallpaper on top. In most cases, the insulating material will have been treated with a fire retardant, but if a fire occurs, the material will still melt and emit toxic gas

The easiest thing to do with tiles, is to take them down. They have almost always been glued on to the ceiling above it with a strong glue, so using a simple wallpaper scraper or similar will do the trick.

The question really is: what is underneath?

More often than not, homeowners have put up these tiles as a cosmetic feature i.e. it's hiding something behind it. So that's where the real hard work comes into it. Are you prepared to address the issue i.e. what the previous homeowner should have attended to properly.

When it comes to coving, it's a bit tricker - especially if one or both sides of the coving has been glued to wallpaper. It's very hard not to rip any of the wallpaper or damage the paintwork. We try and do this so to minimise our works input, but if needed then we'll replace the polystyrene coving with one of the following:

This is usually our preferred option. The material is a hardened plastic, but is fire rated. The difference being that the polyurethane core will not melt nor drip once exposed a fire. 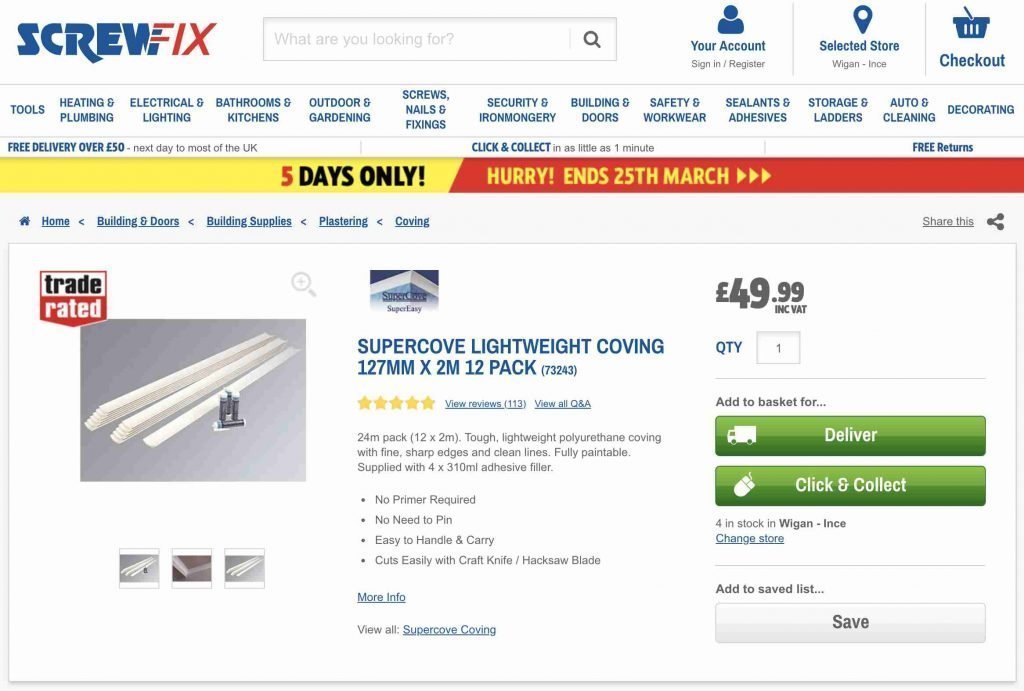 It is available from all good DIY shops in your area. Try Screwfix, Wickes or Wilkos if your local hardware or DIY supplier doesn't have it in. 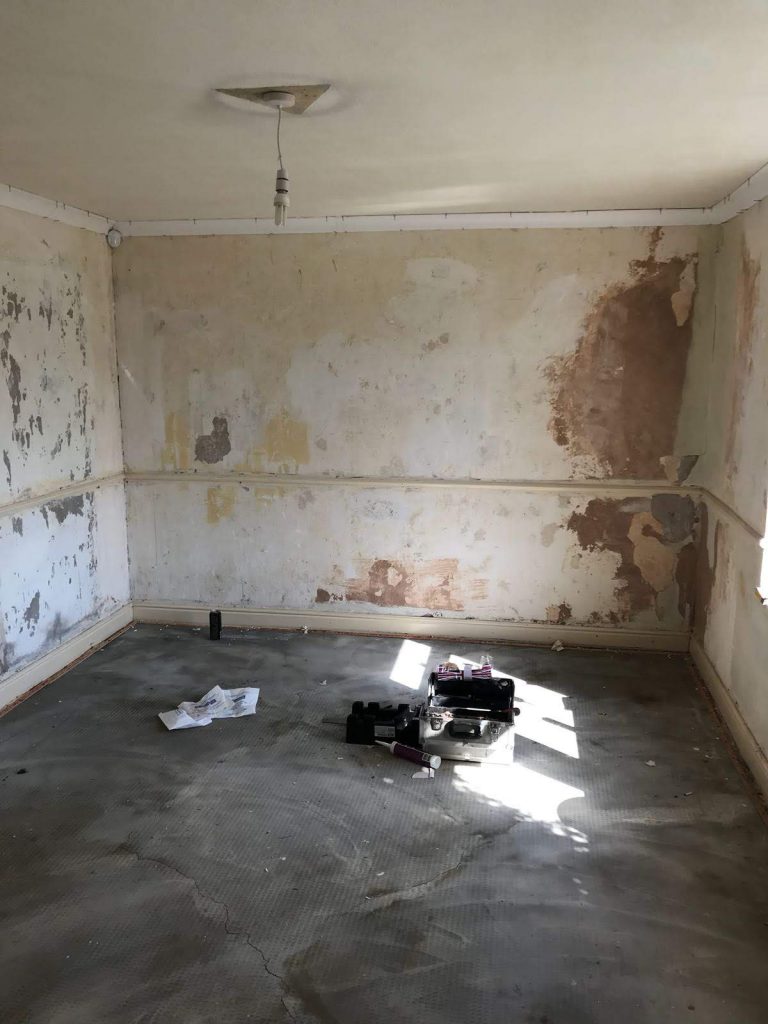 It's lightweight, but tough and easy to apply. The room above shows the new fire rated coving being set in place by nails. Once the product dries, the nails can be removed. 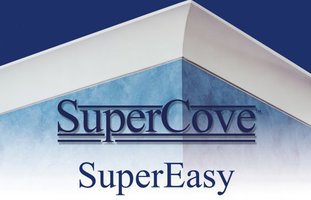 Note: Make sure you get a fire rated certificate when you buy the coving. Please don't buy from eBay unless you are guaranteed to received one.

Plaster coving is the traditional method of coving, but it is much more expensive, much harder to put up and a lot messier. Ideally, this is something you put up at the beginning as opposed to replacing polystyrene coving. It's best to avoid this option if you can.

As long as the removal was done carefully and the wall behind it is still in good condition, then you can probably just put a wallpaper border across the top. This might not be the most elegant of look, but it's the most cost effective.

All you need is a wallpaper border to suit your tatstes, some wallpaper paste and an old brush. Easy as 1-2-3!

In summary, while there is is no legal requirement to remove polystyrene celining tiles, wall tiles and coving, it would be best to remove them as a precuationary measure. If you're a landlord and a fire breaks out at the tenanted property and then the unthinkable actually happens, then a judge will most probably side with the tenant and your insurerance company may not cover you. In this instance, put your hand in your pocket and make the change. i tcould save lives and could save you headaches further down the line.

Instead, we recommend this product...
ERFURT MAV Fire Rated Panels

Alarms4Life
We are a local company based in the North West of England that buys and uses home security systems and associated items during our property refurbishment projects.

Copyright © 2021 Alarms4Life
About
Contact
Terms & Conditions
Privacy
Disclaimer
Alarms4Life.com is a participant in the Amazon Services LLC Associates Program, an affiliate advertising program designed to provide a means for sites to earn advertising fees by advertising and linking to Amazon.
We use cookies to ensure that we give you the best experience on our website. If you continue to use this site we will assume that you are happy with it.OKPrivacy policy